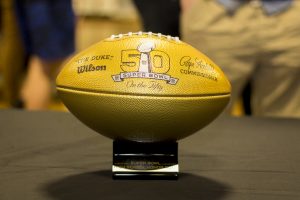 April 6, 2016 – Eddie Murray Day
This year, another Spectrum graduate, Eddie Murray, visited the school. Eddie Murray graduated from Spectrum in 1975. A star school soccer player, Eddie also joined a local Saanich football team, and was later discovered by Tulane University of New Orleans. He developed a highly successful football career and eventually became one of the best kickers in NFL history, as a member of the Detroit Lions and the Dallas Cowboys. 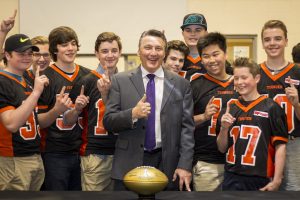 A Super Bowl winner, Mr. Murray is a humble man with a strong sense of achievement. In April, Spectrum was gifted with a 50th anniversary Golden NFL Football. The Golden Football trophies were presented to high schools of graduating students who would go on to play for a Super Bowl-winning NFL teams. Eddie Murray visited Spectrum to mark the occasion with two assemblies to officially “hand off” the Golden Football to the school. The day also involved visits to both Saanich and Victoria Fire and Police, to the Saanich Mayor’s office, and the BC Legislature where Education Minister Mike Bernier introduced Eddie and the Spectrum football team to the House. Later, a dinner was held in his honor that also served as a fundraiser for Spectrum Thunder Football. Many of Ed’s friends and fellow soccer team members showed up for the celebration.
In an introspective conversation, he gave this advice to the youth of Spectrum: “Challenge yourself, if you don’t apply yourself, if you’re lazy you won’t achieve anything. I always say this to my daughter, ‘shoot for the moon, go as far as you can and if you don’t get there then you’ll land among the stars, and that’s not all bad.’”
Ed Murray encouraged students to live in the present moment and really appreciate all that we are capable of. On looking back at his career, he noted “the biggest thing I miss is the locker room, the jokes, the camaraderie, the hard work, and just getting together to do our best.” — a reminder to be grateful for all that we can become. 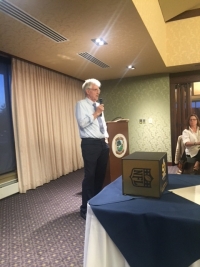 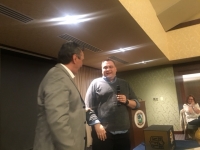 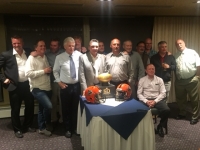 One thought on “Eddie Murray Day”